The Master Portal stands at the heart of the RCauth and MasterPortal setup. The Master Portal caches long lived user proxies into its MyProxy Crendential Store, and returns short lived proxies on demand for authenticated users via the VO Portal. 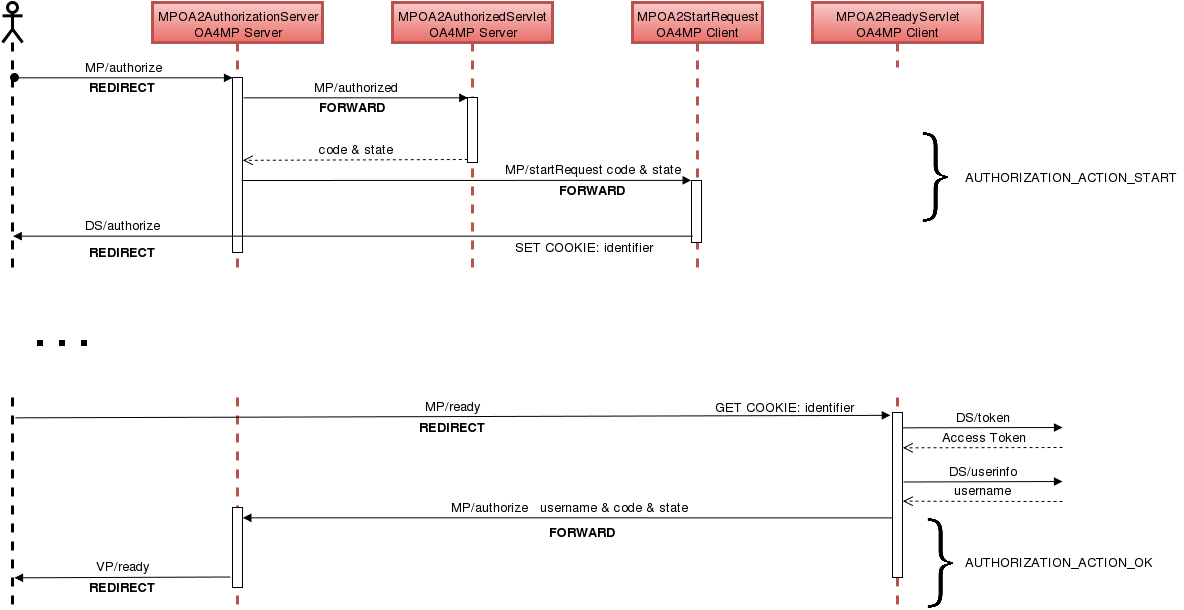 Both Master Portal components expose a set of endpoints, however some of these endpoints are only meant to be called internally. Make sure to restrict access to internal endpoints!

Users authenticating to the Master Portal will always get redirected to the Delegation Server's WAYF. Here, the user will have to choose the correct Identity Provider (IdP) in order to proceed with the authentication. This extra manual step could degrade user experience (e.g. by having to choose the same IdP many times, or by having the user choose the right IdP). In order to prevent this from happening an additional request parameter has been implemented called the idphint.

The idphint parameter can be sent to the /authorize endpoint together with the rest of the standard OIDC request parameters. The value of the idphint should be the url encoded entityID of the user's home IdP. The Master Portal will simply forward every non-OIDC specific parameter (including the idphint) to the Delegation Server. The Delegation Server in turn will use this request parameter to notify its WAYF about the users' preferred home IdP, which then will redirect the browser automatically to the requested IdP's authentication page, without requiring any prior user interaction.

The two Master Portal components are separate web applications living inside the same web container (tomcat). In order to be able to forward requests internally between the two (without going through the browser) the crossContext flag has to be enabled in the web container. This will allow all web application to get access to each other, within the container. You can enable this in tomcat in CATALINA_HOME/conf/context.xml

The MP Server stores session information in its back-end database in a structure called transactions (see oa4mp transactions). The transactions are indexed by the authentication code (same as temp_token). In order to retrieve the current transaction the authentication code is needed. Therefore, in order to keep session across the authorization flow split, the code has to be transmitted to and from the MP Client. The MP Client adds a new database entry called mp_server_request_code which is used to store the code parameter received from the MP Server.

Similarly, the MP Client stores session information in its back-end database in a structure called assets (see oa4mp assets). The assets are indexed by a session identifier which is an arbitrary identifier that gets created by the MP Client at the start of a request. The MP Server stores this identifier in a new database entry called mp_client_session_identifier. The MP Server does not use this stored value during the authentication flow, but only during the proxy retrieval flow. Using this identifier the MP Client will look up its pending session with the Delegation Server and retrieve credentials on demand.

Between Browser and MP Client